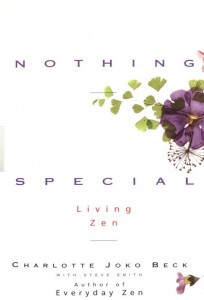 Charlotte Joko Beck, Nothing Special, “From Drama to No Drama,” p. 249.

Blue Cliff Record, #90: “Zhimen and the Essence of Prajna”

A monk asked Zhimen, “What is the essence of prajna?”

The monk said, “What is the action of prajna?”

Zhimen said, “The hare conceives by the full moon.”

Zhimen was Xuedou’s teacher — Xuedou (“Setcho” in Japanese, b. 980), was the compiler of the Blue Cliff Record. So it’s possible that the “monk” in this case might have been Xuedou himself.